Does solar work in the “rainy” northwest?

This is a good question, and one that is commonly asked.

Yes, solar power works just very well in our area of Washington State.  Here on the north Olympic and Kitsap Peninsulas we average approximately 3.5 hours of full sun per day.  That is about 70% of the solar resources of southern California.  However, unlike southern California most of our sunshine arrives between March and September when our electricity needs are low, especially for homes designed to not require air conditioning.  If your system is tied to the grid, your summertime excess electricity generation can go back onto the grid, and may be used by your neighbor or effectively by Californians during their peak energy usage.  You will get a a credit for every kwh you put onto the grid, and you will use those credits later, perhaps that night, perhaps not until winter.

For another comparison, western Washington on average receives more yearly sunshine than does Germany on average.  This is significant because for the 10 years 2005 – 2014, Germany led the world in the number of installed solar modules with over 50% of the world’s deployed solar modules during that time (China has now become the world’s top installer of solar pv.)  If Germany can effectively utilize solar power so can western Washington.

We see an annual variation of up to 15% even among the same solar pv systems due to weather variation of one year to the next.  The summers are predictably good, the winters are predictably winter, and we see the variation mostly in the spring – some springs are notably sunny and some are cloudier extensions of winter.  Depending on exactly where you live on the Peninsula, if your home is unshaded, you can count of seeing 1000-1200 kwh/year-KW. 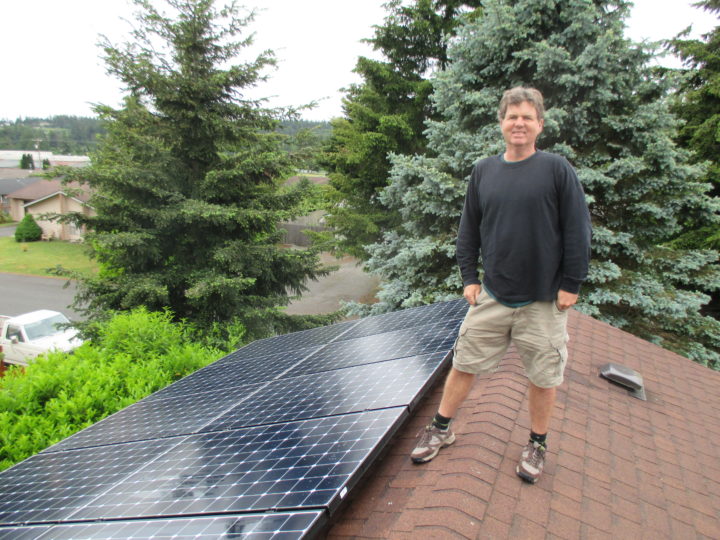