aThe first mention of the photovoltaic (PV) effect was in 1839 – by the French experimenter, Edmund Becquerel. He discovered that a voltage was produced across the two electrodes of  his experimental electrolytic cell when it was exposed to light. 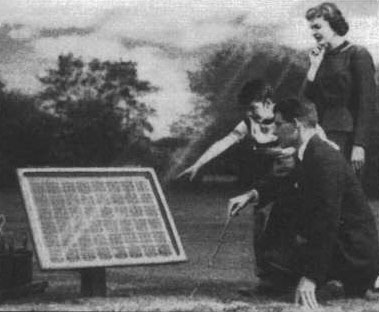 In 1904, Albert Einstein published his paper on the PV effect and for his effort he won the Noble Prize in 1921. Two semiconductors, in this case silicon, can be “doped” so that the crystal structures of adjacent regions are short of or have surplus of electrons (same process to make transistors.) Photons of light striking these surfaces cause current to flow from one region to the other. An external circuit carries the newly displaced electrons through the load (a battery or your Sony PlayStation2) and returns them to the originating region.

To the left, is an image from a 1954 release from Bell Labs touting the “Bell Solar Battery.” The solar PV panels were not commercially available at that time, and were tremendously expensive, but Bell was obviously looking forward to today’s small scale practicality of solar electricity.

Throughout the 1960’s, the “Space Race” provided some funding for some research and development of this new technology to provide power for orbiting space craft. Skylab and the Hubble Telescope are pictured below orbiting our blue planet.

As with anything having to do with orbiting space craft, the price for these panels was pretty high, there have been some estimates that the cost of some of NASA’s early panels were over $30,000 per watt. 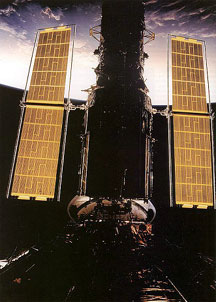 In the 1970’s, the first residential systems were adopted for powering off-grid homes. The back-to-the-land movement sent a group of ruggedly independent people into the woods and some of them began using solar panels to charge batteries, and they would commonly run DC-powered appliances in their home, such as those you would normally use on a boat or in an RV.

A popular opinion among many people who were involved in the solar industry during this time, was that the “Emerald Triangle” region of Northern California was a leader of solar PV innovation among those who lived in the outback & off grid – ahem, agricultural pursuits.

During the 1980’s, the Personal Computer Revolution fueled another important advance in the PV industry, while also providing some pricing decreases due to the relatedness of the silicone used in microchips to the silicone used for the PV cells. Computers are sensitive to the quality of the power they receive and standard PC’s require AC power.

The desire to use PC’s while off-grid fueled the need for inverters to change the DC power that batteries provide into AC power that PC’s could use. Early inverters produced a crude simulation of the sine-wave power provided on the utility grid, and many sensitive electronics didn’t function satisfactorily, leading to the development of the next generation of sine-wave inverters.

At this point someone got the bright idea that as long as they are producing utility-grade (or better) AC power, why not feed any excess power back into the grid once the batteries are full. Initially the utilities were not very happy about the idea, and raised many safety concerns. Once these were answered, legislation was passed requiring utilities to accept power onto their grid from “customer-generators.” The response by many utilities was to offer to credit the customer-generator for their avoided cost, which was often a fraction of what they charged. This is still the case in several states, but here in Washington, the legislators passed a “Net-Metering” law, which requires that the utility credit the customer-generator the same price per kilowatt-hour as they charge. Net-metering refers to the practice of billing the customer for the net amount of kilowatt hours used (gross kWh consumed minus the kWh fed into the grid.)

Today, there are financial incentives available at the state level and federal level, along with net-metering, to encourage people to install solar on their homes. The benefits of distributed power-generation are not only great for the individual, but for all of society as a whole. As more people awaken to the possibility, and adopt this technology, the economies of scale will continue to improve. 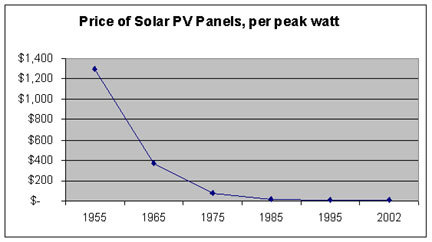 One industry group estimated that as PV production doubles, the price will decrease by 20%. The graph below shows the cost per watt for PV panels from the 50’s to the 90’s. In contrast to NASA’s early purchases, you can now purchase panels for under $4 per watt.

PV technology may also play an important part in Washington’s economy in the next 10 years, as several industry leaders are based or have facilities in our state. A recent Governor’s report indicates that employment opportunities are substantial as the renewable energy industry continues to grow.