As more people purchase the economical Electric Vehicle models that are increasing their range and becoming an obvious choice of new car, we are also getting asked a lot more about using those batteries for your house or also the Vehicle-to-Grid concept (V2G).  There have also been several recent articles talking about developments in V2G technology, and the concept is interesting – “as long as I have a 40 kwh lithium battery in my car which is parked in my garage, I think it would be a good to idea use that battery for powering my house.” 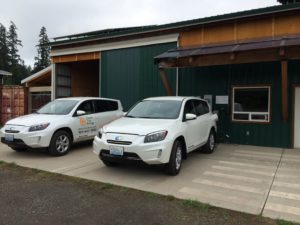 While this sounds good and we look forward to eventually bringing this technology to your home, it is not here now, and may not be here for a long while.  In the meantime, your grid-tied solar PV systems will be making clean power and saving you money every month without using your EV’s battery.   We just added a second EV to our company’s fleet, a new 2018 Nissan Leaf, which came with 2 years of free electricity when we charge at any EV stations in one of four networks, two of which are common here on in Western Washington – Blink and Charge Point.

Nissan seems to be a leader in V2G innovation in Europe and Japan currently as mentioned in this article from last autumn.     https://electrek.co/2017/10/04/nissan-ev-ecosystem-free-power-leaf-vehicle-to-grid/  I notice that the images in most of these articles are still digital mock-ups at this point, not actual installation photos.  Also notably, I have not seen recent developments along these lines in the US.

I first saw this concept encouraged by Amory Lovins in the late 1990’s, so we have been looking forward to this functionality for a long time.  The concept brings up several questions for me.  There are three main uses for large grid-tied residential scale battery banks – one is for emergency back up power in the event of an outage, one is to provide utility dispatchable power for peak load shaving, and the third is for “self-consumption” on a daily basis in order to shift the timing of when a home with grid-tied solar uses that energy.

In regards to the first possible usage, as back-up power during an outage, I would like to see how the controls would work.  What if I would rather have a full battery in my car than use that energy for my home?  What if I just got home in the evening with a nearly empty car battery when the outage occurs?  Ideally the next day would be sunny, and the power from my pv array could both charge my car battery and provide some power for my house.  How would I prioritize that energy use – would I rather fully charge my car battery first, then make excess available for home usage?  Realistically, I think we are quite a ways from having inverters, chargers, and controls ready to address those questions satisfactorily.  However there is probably no technical reason why those could not be solved, though there might be a little complexity on the client side to make certain it works the way you would want.

Regarding the peak load shaving for utilities, this is not something on the horizon at all here in Washington State to my knowledge.  There are however several markets where utilities may compensate customers for being able to access their stored energy and use it across large distributed areas in order to prevent the need to fire up a gas “peaker” plant during moments of highest load.  This is the case in some markets, where there are commonly peaks on hot weekday afternoons when industry is functioning and also there is a need for air conditioning.  In this case, these batteries are not available for emergency back up power.  It would be an interesting question as to when I would want to make my car battery (and therefore my driving range) available to the utility, and how much I would let them use, and how much that would be worth to them and me.  I think answering these questions is the experimentation being done by Nissan in these projects I have read about in other countries.   Again there is no work being done along these lines with V2G in the US of which I am aware.

In the third case, the use case for batteries is a function of the utilility policy that may no longer allow new grid-tied pv systems to feed energy back into the grid (as in Hawaii currently) or rate schedules where there is a strong price signal discouraging customers from sending their solar electricity onto the grid during sunny hours (as in some California markets currently.)  We do not have these pricing signals in Washington State currently.  These markets are primarily the ones being addressed by the residential-scale wall-mounted “Power Wall” batteries being made by Tesla at the moment, but nobody is actually doing anything beyond thinking about using vehicle batteries for this in the US at this point.  There are technical challenges and control system complexities, but I am guessing they will all be solved eventually, though quite a while from now.  I look forward to combining these systems with our roof-mounted solar pv systems some day.

The reason why it seems there is no progress on V2G in the US at this point is complex and may be political rather than technical.  I sometimes wonder if it is because utilities and oil companies hold greater influence over electrical and building codes in the US than in other countries.  Will we see Vehicle to Grid innovation here in the US soon?  I don’t know.
Today the price of solar is lower than ever before and we have several excellent state and federal programs to help defray those costs and improve the economics of these upgrades to our clients’ homes.  The solar PV arrays we are installing now have 25 year warranties guaranteeing they will still be producing 92% of their originally rated power at 25 years, so there is little doubt that many of the solar pv systems we are installing now will eventually be integrated into storage solutions with wall-mounted batteries and EV batteries that will provide for back-up power and possibly shape the timing of loads that make sense for both our clients and the utilities. 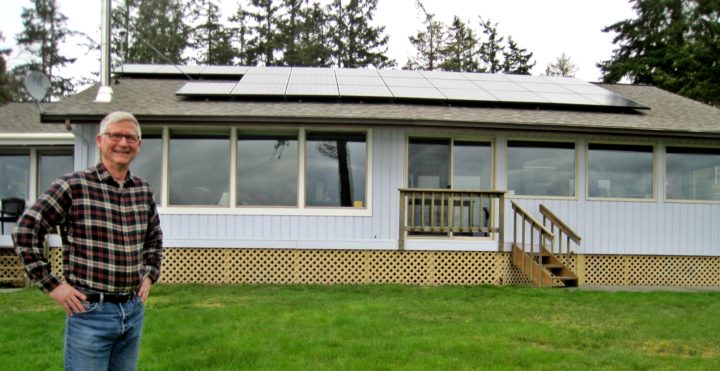