Last month in Bellevue, leaders in the state’s solar industry gathered along with legislators, regulators, and solar advocates for the annual Washington Solar Summit.  This year was notable for several reasons including much discussion of the transition from the legacy incentive program to the new and improved incentive program, a review of the status of net metering across the 60+ utility territories in Washington state, and a keynote speech from Gov Inslee, a supporter of renewable energy during his entire political career.

The state’s small-scale renewable energy incentive program, originally passed in 2005, has been successful in raising awareness, and recognizing the benefits of distributed generation, but had reached the end of its useful life as a program due to its 2020 sunset date.  The new incentive program will provide certainty for another few years while keeping the state’s overall investment low and making sure the state is getting the best results for its support of the industry.  The downside to the new program is that it appears the overall caps are low enough that the local solar industry will experience two very busy years until the program closes.  When programs open and close and dramatically affect demand suddenly, it presents a challenge to businesses that serve that market.  We are happy to forecast however that the new program could result in an additional 100 solar homes each in Jefferson and Clallam Counties in the next two years.

While the state’s new incentive programs are encouraging another wave of distributed solar installations, the state’s net metering law is outdated and does not provide the necessary support for the potential new projects which have now been incentivized.  Updating the state’s Net Energy Metering laws is the most important issue the solar industry faces, and with over 60 utilities statewide now left to develop their own policies, the utility industry would also benefit from stronger state guidance.

Gov. Inslee spoke about the importance of renewable energy from a climate change perspective, but also highlighted the economic benefits to the state of being a leader in clean energy, in terms of jobs and high tech facilities like the REC Silicon facility in Moses Lake.  While federal policy remains unpredictable, at the state level, Gov Inslee has provided leadership on this issue through partnership with several other states in the United States Climate Alliance.  More information is available here: https://en.wikipedia.org/wiki/United_States_Climate_Alliance

With the brief moment in which I had the Governor’s ear, I expressed support for carbon pricing as a way to achieve greenhouse gas reduction targets.   It makes economic sense to me to tax things we wish to discourage, like carbon emissions, rather than taxing things we want to encourage, like individual income and home ownership. 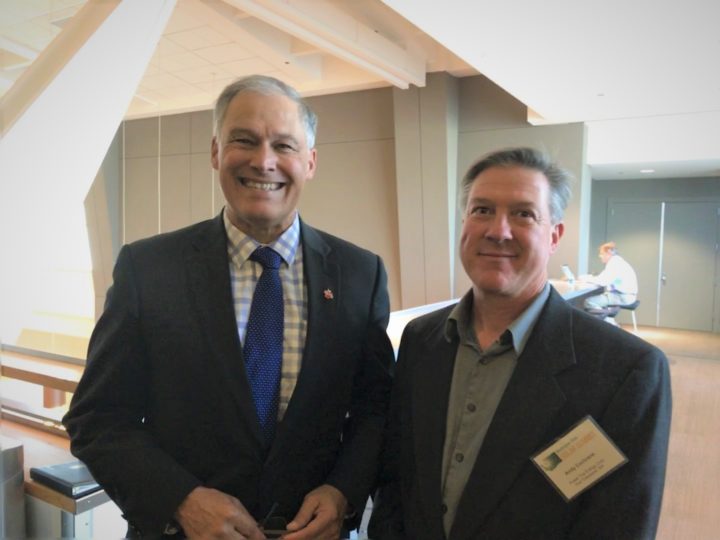