As many of you know, the declining state solar incentives here in Washington State are scheduled to completely sunset June 30, 2020.  The cost recovery program has been one block in the foundation of solar economics here in Washington State since 2007.  In that time, we have seen continued geometric growth, increasing the installed KW by ~ 40% per year.  However its success is the cause of distress in many areas.  Because the cap on the incentive was fairly low, that cap has now been breached in many utility areas, including Jefferson PUD.  In Jefferson PUD for the program year July 1, 2014 – June 30, 2015, incentive applications were approximately $225,000 and the overall incentive pool was only about $155,000, resulting in prorated payments down to 70% of the regular base rate.  At the inception of this program, there was virtually no solar PV market in the state, and nobody expected to exceed these caps by this time.  This is an unfortunate and unexpected loss for the early adopters now that solar has gone mainstream.

Without a remedy to the loss of state incentives, we may well see a leveling-off of the solar growth.  This might well result in layoffs at our company and others across the state.  In Washington State right now, there are 128 companies that self-identify as solar companies, employing about 2400 people, nearly all installers.  At Power Trip Energy Corp, we currently employ 10 people, and have installed about 3 MW since 2003.

State-wide solar capacity is now 60 MW installed, up from 11 MW in 2014, and 6 MW in 2012.  Almost all of this installed PV is customer-owned, distributed generation making power at the point of use, and paid for by the property-owners.  The state offers no up-front rebates, however there is a sales tax exemption, and also the 30% federal tax credit, which has helped people decide to invest their own money in solar PV on their homes and businesses.  The main support the state offers for the installation of PV is the production incentive which pays for all PV produced, creating an economic mechanism for the additional value we see in solar above and beyond electricity generated by coal, nuclear, and the federal hydro-system on the Columbia and Snake Rivers.  As mentioned above, the state solar production incentive is nearing the end of its useful life.

Despite the current solar capacity of 60 MW seeming large to some of us, it is important to remember that this is still responsible for much less than 0.5% of our overall electricity portfolio.

There is currently proposed legislation that will create a second phase of state incentives, which will close the existing program and accept new enrollments through 2020 and would provide 10 years of incentive stability for new enrollees in which to make fair financial returns, while decreasing the incentive rate structure every year between 2017 and 2020.  This is called HB 2346  – Promoting a Sustainable Renewable Energy Industry – and you can view the full details here:  http://app.leg.wa.gov/billinfo/summary.aspx?year=2015&bill=2346

This bill is the result of a two year process bringing together multiple stakeholders including the nascent solar industry, utilities, environmental groups, and consumer advocates.  We are strong supporters of this bill for many reasons.

Since 2002, we have placed our own self-interests inline with the belief that our community and our state would be well-served by developing a robust renewable energy infrastructure.  We have made the case that individuals should invest in renewable energy on their own homes as a way to generate some of their own capital, decrease their dependence and expenditures upon utilities.  This serves the individuals by increasing the value of their home, and decreasing their energy bills in the long run.  It serves the community by keeping more money local, and making the overall community more resilient.  It also contributes to the overall global benefit of producing energy without contributing the the carbon emissions of coal, the radioactive waste of nuclear plants, or the environmental degradation of the mammoth federal hydro system.

This bill supports those goals by allowing individuals to continue to benefit from investments they make in their own home through the diversion of a portion of the state’s utility tax.  Due to the relative low caps per project on this incentive, it is only incentivising small (generally under 20 KW) solar pv arrays, which will nearly all be installed on residential and small business rooftops.  Since these arrays are installed at the point of use, there are no inefficiencies from transmission losses.

In this way and others, the promotion of distributed solar energy benefits all ratepayers.  Northwesterners do benefit from the cheap electricity produced from investments made in this federal system decades ago (despite its decimation of salmon and other problems).  Likewise will future generations benefit from our efforts today, as we diversify our energy infrastructure with more solar producing clean renewable distributed energy.

For these reasons and more, we support HB 2346, and urge you to do the same. 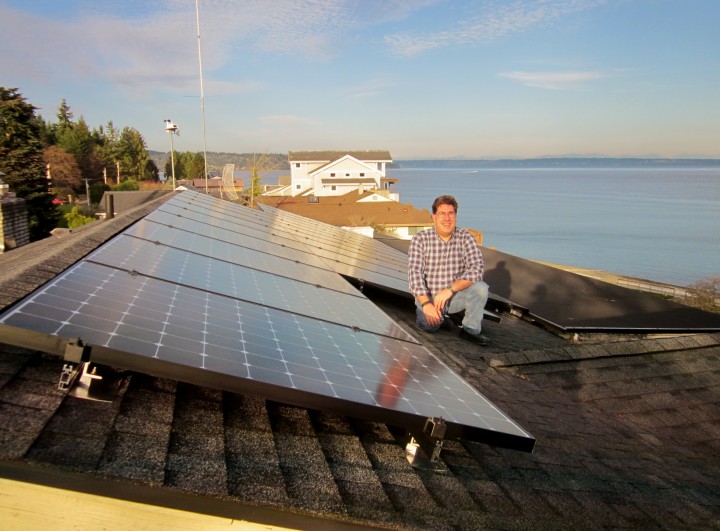