Mandatory solar power: The wave of the future?

I recently read about two towns in California that have mandated the installation of grid-tied PV systems on newly constructed homes. This government legislation illustrates to me how far residential solar power has come. Just a couple of decades ago, solar power brought to mind one solar panel powering a flickering light bulb hanging from the ceiling of a wood cabin. And now City Councils are insisting upon solar! The passing of these laws leaves me wondering if legally mandating solar installations is a growing trend and what will this mean for the future?

The town of Sebastopol has about the same population as Port Townsend, Washington, around 8000 souls. In 2013, this quirky and decidedly liberal town passed a law requiring solar panels on all new buildings and additions with nearly unanimous support from its City Council. According to a May 10, 2013 article by Miranda Green of The Daily Beast, “Sebastopol’s ordinance orders that the solar systems must provide 2 watts of power per square foot or offset 75 percent of the structure’s electricity use.” So a humble 3.6 KW system would be required on an 1800 sq ft home. 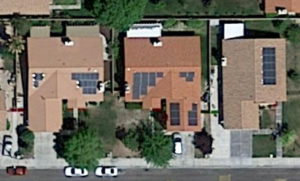 Unlike Sebastopol, Lancaster, California is largely politically conservative. It has a population of around 150,000, about the same as the Washington State counties of Clallam, Jefferson, and Mason combined. According to Green, Lancaster was the first city in the United States to mandate solar panels on new construction. The city council was unanimous in approving a zoning code amendment requiring housing developers to add solar power systems on all new homes. This new code was initiated by the Republican mayor, R. Rex Parris, who wanted to make Lancaster the “solar capital of the universe.” The satellite photo of Lancaster above shows a segment of a housing development impacted by the legislation.

A Marketplace.org article posted on August 11, 2016, by Jed Kim addresses the question of mandating solar power. According to Kim, “Santa Monica recently approved an ordinance making rooftop solar systems mandatory for all new construction and major renovations.” San Francisco is planning on implementing similar legislation in 2017. Dean Kubani, Santa Monica’s chief sustainability officer, explained that the ordinance was approved to aid the city’s efforts to reduce emissions, “We, like a lot of other cities, are looking at greenhouse gas impacts and carbon impacts, and we’re trying to figure out how can we become carbon neutral.”

In the greentechmedia.com article, What It Really Means to Require Solar Panels on All New Buildings (June 20, 2016), Julian Spector writes, “Other municipalities have already reached out to San Francisco for more information about the policy, including Boston, Washington, D.C., Cambridge and Palo Alto.” Spector concludes, “The endgame will be cities where rooftop solar isn’t a personal challenge for a homeowner, it’s just one of many components expected of a market-ready property.”

It seems clear that mandating solar power is indeed a growing trend. However, I am hesitant to assert that solar power should be mandated for all new construction across the country. All too frequently, legislation that is meant to help people ends up presenting unintended consequences and sometimes does more harm than good. What are the possible unintended consequences of legislating solar installations? How successful are other incentive programs and commercial promotions in encouraging people to adopt solar power? If we wait for the market to come around to solar, will it happen fast enough to mitigate our climate crisis? What do you think? What questions do you have about this topic or other issues with solar power? 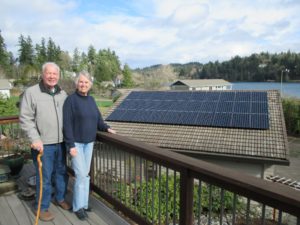